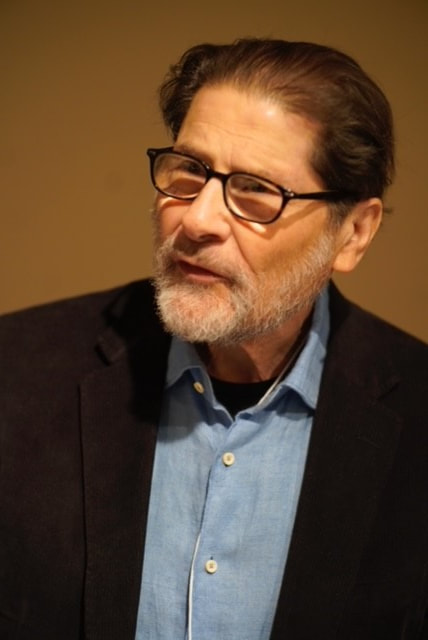 Coming through the whirlwind was the first book by Michael Eigen that I read. As soon as I finished it I wrote him a letter. A few weeks later I was delighted to receive his reply. Over the years, the internet made correspondence quick and easy to share ideas. I've gotten to know Mike mostly through reading his many books, participating in many internet discussion forums with him, and speaking by phone. Twice he's come to Seattle to lecture and once I traveled to New York City to see him in his modest Central Park office. I've written about his work in my first book A Fruitful Harvest: Essays after Bion and I recently completed a chapter called "Becoming a welcoming object" for a festschrift honoring Dr. Eigen. It was published by Karnac, titled Living Moments, edited by Loray Daws.
If there is such a thing as a "crazy wisdom" lineage in psychoanalysis, Michael Eigen embodies it. I continue to learn from contact with his creative energy, intuition, generosity, and courage to face the complexity of life in all its many aspects. Here's an appreciation that I wrote:

The Impact of Michael Eigen’s Influence: A Personal Note (2005)*

Several years ago Time magazine ran a cover story featuring the blunt caption “Is Freud Dead?” Many readers probably equated Time’s question with another --“Is Psychoanalysis Dead?” For those people deeply involved with Michael Eigen’s unique brand of psychoanalysis such questions deserve real consideration. What is a living psychoanalysis? What does it look like? How does it feel? How does one learn to practice live analysis? How does one communicate about this terribly private, intimate, and transformational calling?

For many years Michael Eigen has been an articulate, provocative, generously prolific and outspoken advocate for a living evolving psychoanalysis. The cumulative strength of his several books and numerous papers creates a force field of ideas and impacts. Never satisfied with the inherited discourse of any school or author, Eigen has searched to find his own language, a language of experience, to convey the deeply personal work/play of psychoanalytic sessions.

Many readers have come to value the radical generosity of Eigen’s writing. Here is an analyst who can at times be deeply appreciative and at other times pointedly critical. Here is a writer who wholeheartedly engages the work of others while steadfastly speaking in his own personal idiom. Here is an analyst who as he ages seemingly finds more and more courage to face himself and his patients in a “working space for truth”. Here is a man who dares to make psychoanalysis an occasion for celebration, prayer, and song.

There is a danger in writing about psychoanalysis that such writing sometimes verges on kitsch. The author may be too heroic in his rhetoric about this “impossible profession” or too intimidated in his pursuit of approximations of truth(s). Psychoanalysts are neither usually poets nor pure scientists. Psychoanalysis poses immense challenges to the everyday use of words and language to communicate meanings that are both ordinary and sometimes extraordinary. Eigen has been willing to push psychoanalytic writing to new limits in his attempts to honestly convey the experience of being in psychoanalysis.

Michael Eigen’s oeuvre offers an antidote to kitsch sensibilities. The novelist Milan Kundera writes in The Unbearable Lightness of Being that kitsch is “...the absolute denial of shit, in both the literal and figurative senses of the word; kitsch excludes everything from its purview which is essentially unacceptable in human existence” (Kundera, 1985, p. 248). How much psychotherapy today, no doubt well meant and sincerely conducted, nonetheless proliferates this very kind of kitsch sensibility? In The Art of the Novel Kundera writes of kitsch as “... the need to gaze into the mirror of the beautifying lie and to be moved to tears of gratification at one’s own reflection” (Kundera, 1986, p.135).

In contradistinction to kitsch sensibility, Eigen is at home in the messiness of daily life, even, to some degree (as much as any one of us can be) in the violence of psychic life that sometimes spills into action. His sensibility is complex, paradoxical, straining at open-heartedness, but tough, wary, and aggressive too. Integrations abound. Eigen is a theoretical bridge builder though he has no intense attachment to theory itself. Indeed the bridge (rainbow?) might be a fitting emblem for his work. Eigen seems to strive to create a nondual space of awareness in his analytic work where splits naturally dissolve given sufficient time for soaking in the broth of emotion and attention.

Integrations occur throughout our lives if there are the minimum conditions necessary, both internally and externally, to support them. One task the psychoanalyst faces is how to identify and to co-create such conditions with each individual patient. Noah’s rainbow is a symbol not only of hope but a memorial to catastrophe. Eigen works in the shadow of this rainbow, between hope and catastrophe. Flowing through Eigen’s books has been a concern for how we each must grow capacities for processing the impacts and burdens that having a mind faces us with. Eigen’s sensibility is in a very deeply felt way one that embraces the whirlwind as an experience of potential revelation. Religious and spiritual imagery are explored not for effect, but for the entrance such images offer to states of experience that are highly condensed and require sustained elaboration to personalize and benefit from. Eigen pays more than lip service to the embryonic in people, couples, groups, and professions. He searches out the points of growth and encourages them. He knows that psychoanalysis is dangerous. Eigen knows that life, too, is dangerous, yet, he unapologetically confesses his love for life and for psychic growth coming through suffering. I know of few writers who have offered such sustained meditations on psychic pain, destructiveness and deathfulness as Eigen has (see Psychic Deadness, Damaged Bonds, Toxic Nourishment, Rage, for example) and at the same time have so consistently and painstakingly testified to the vitality and affirmation of ordinary experience as mediated by our sensitive selves.

In his book 9 1/2 Mystics, in a chapter on the famous scholar Gershom Scholem, Herbert Weiner recalls a remark he once heard a Jerusalem rabbi make about the way social scientists studied the field of Jewish mysticism and Kaballah. Weiner writes:

“They are accountants”, the old man said. “That is, like accountants, they know where the wealth is, its location, and value. But it doesn’t belong to them. They cannot use it”. (Weiner, 1992, p. 62).

Through his work, Michael Eigen offers us a picture of a psychoanalyst trying his best, and often succeeding, or so it seems, to go beyond the cataloging of experience in order to use the wealth that life offers and that no one can own. In this way he really embodies the description "psychoanalytic mystic".

*Thanks to Keri Cohen for reclaiming this text from an internet archive and forwarding it to me.