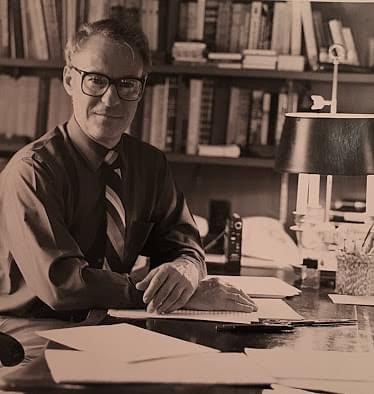 James Grotstein, MD
During my psychoanalytic training James Grotstein visited Seattle several times to lecture. Occasionally I went to LA to hear him lecture at the Psychoanalytic Center of California. Later, I traveled monthly to San Francisco for several years to participate in day long Bion seminars that Dr Grotstein privately convened while writing his book  A Beam of Intense Darkness. I have fond memories of those lively group discussions which remain vivid to me today.

Below is a short description of Dr Grotstein's work that I gave at the Evolving British Object Relations Conference in Seattle in 2010. It conveys my gratitude and admiration for his work:


It is my pleasure to welcome you to the 7th Annual Evolving British Object Relations conference. And, it is my honor to introduce the keynote speaker tonight, Dr. James S. Grotstein. In my role as moderator I would like to take a few minutes to put Dr Grotstein’s work in context as a way of preparing a space to receive his paper.

While he is known as a peerless teacher of Klein and Bion, many of Dr Grotstein’s papers show a remarkable range of interest and a rare grasp of multiple psychoanalytic models. For a long time he seems to have had a particular interest in linking, comparing, and sometimes even integrating differing points of view.

For example, he has written elegantly about the relationship of ego psychology to Kleinian thinking as well to British Object Relations and the independent tradition. His depth of appreciation of writers like Winnicott, Fairbairn, Tustin, and Matte Blanco is rare as is his depth of historical context. For example, a favorite paper of mine involves his re appraisal of the concept of the infantile neurosis from Freud to today.

Dr Grotstein’s capacity for describing models for working with primitive mental states is pioneering. Though rooted especially in Klein and Bion, his papers on psychosis and schizophrenia are probingly interdisciplinary including not only comparative analytic thinking but also the importance of neuroscience as far back as the early 1980s.

It is impossible to summarize the range of theoretical innovations that he has introduced. An especially important idea for me is his re consideration of projective identification, which he extends thru the concept of projective trans-identification. This concept has implications of many sorts both for technique and for working through in the counter transference. Also, I’m particularly influenced by his emphasis on the dual track of autochthony and alterity in understanding the self’s experience both in terms of development and psychopathology.

If you are not already aware of them, you should know about his several books. My favorite is “Who is the dreamer who dreams the dream: a study of psychic presences”. He has recently published volumes on Bion as well as a two part development of his own psychoanalytic thinking in the Klein-Bion tradition called “At the same time and on another level…”

His “root” tradition is Freud, Klein, and Bion. His depth of appreciation of Klein’s work is rivaled only by his ongoing conversation with Bion. Dr Grotstein’s Klein is alive, vibrant, and relevant, -- the foundation on which he builds his own impressive 21st century Bionion models.

The object of psychoanalysis is experiential, not intellectual. It is not just a profession, it is a life long calling and Dr Grotstein embodies this passionate commitment. There is an oral transmission that comes from meeting and learning with real authentic teachers who share their personal embodied experience of psychoanalysis as a living evolving tradition.

The thing that I admire perhaps most about Dr Grotstein is his generosity as a teacher. He has been encouraging to whole generations of psychoanalysts and this is a very important part of his legacy.

When we meet real teachers we take in the energy of their transmission, something beyond understanding the concepts. We sense “the song and dance level” of their speech and presence, as Meltzer might say.

We recognize and contact an energy of presence that stimulates our minds and associations, memories, and preconceptions. This special kind of presence helps to wake up our own creativity and potential for realization. Real teachers like Dr Grotstein sponsor a generative space where “thoughts in search of a thinker” can be intuitively sensed, welcomed, and recognized.

Bion observed that there is a mystic function in the personality and that developing this function is part of the reality principle and the search for deepening comprehension of psychic as well as existential truth.

Tonight, I invite you to hold an open welcoming space in mind to allow the possibility of glimpsing new and novel ideas. This commitment to openness can sponsor a potential space, a play space, a multi-dimensional dynamic field, where the new perception can expand the individual and the group container in unpredictable and creative ways. This is a sensibility that I feel I have imbibed and gradually strengthened from contact with Dr. Grotstein and his psychoanalytic attitude.